The week spanning Father’s Day (June 17, 2001) to St. John’s Day (June 24, 2001), stresses a saintly plant, St. John’s-wort, Hypericum perforatum, and its relatives St. Andrew’s Cross and St. Peter’s-wort, a real saintly combination. As best I can determine, Hypericum was not mentioned in the Bible, though St. John’s-wort does grow in the Holy Land now as a weed. And I have seen it there, cultivated as a medicinal. Poor Israel, with little forest and little fresh water, is better off with a sun-loving weed, like Hypericum perforatum, than a moist forest species like Hypericum punctatum.

Overgrowth of introduced forest-tolerant weeds, like bittersweet, honeysuckle and multiflora rose, are choking out important forest medicinal plants like black cohosh and wild yam, and the subject of today’s rant, Hypericum punctatum. The latter does better in forest, and has more active ingredients (I think), than does the introduced European weed, Hypericum perforatum. Hence, methinks, the forest species may be potentially more medicinally important than the Klamath Weed, another name for Hypericum perforatum, which once had a price on its head in California. 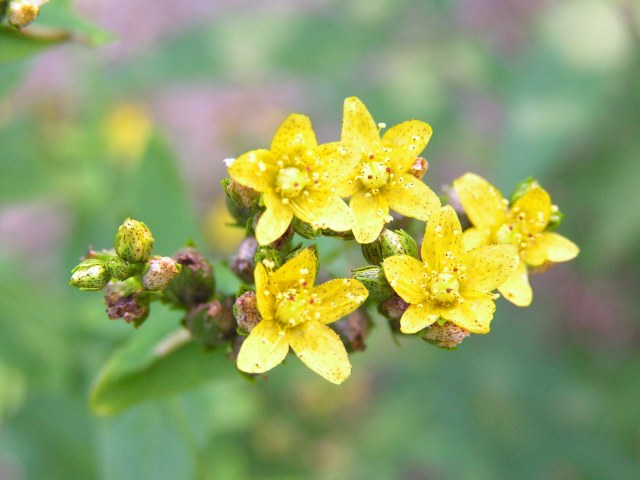 Along Highway 29, Howard County, Maryland, and probably along most highways in the U.S., in full sun, you’ll find the introduced weed, Hypericum perforatum. But drop out of the heat of the highway into the cool of the eastern deciduous forest, and you’ll find the shade-tolerant native American medicinal plant, also known as St. John’s-wort, Hypericum punctatum, with bigger leaves and smaller flowers than the European weed. More importantly, analyses provided me more than a decade ago (see below) that my Hypericum punctatum contained more of the active ingredient, hypericin and related compounds, than the weed. This tells me, if not the FDA, and the merchants of Hypericum perforatum, that our Native American species would be more medicinal for those activities based on hypericin than the better studied weed.

And those are just the data accrued for hypericin, one of dozens of biologically active compounds in Hypericum punctatum and the better studied H. perforatum. Yes, I am suggesting that from a commercial view, Hypericum punctatum might be a poor man’s generic equivalent, cheaper and more potent, than the processed standardized Hypericum perforatum extract. But yes, I also believe that those who can afford the processed standardized St. John’s-wort are more likely to get the a specified dosage of hypericin. Remember these secondary metabolites like hypericin often vary 10-fold, sometimes more than 100-fold. So without analyzing my Hypericum perforatum anew I don’t know how much hypericin it contains. Nor would I know how much the weedy species along Highway 29 contained, without analysis.

Hypericum, mixed with my Father’s Day flowering evening primrose; serotoninergic tryptophan rich, Oenothera biennis, would seem to me to be the herbal mixture of choice for PMS and PMDD, after reading Brown (2001). Of course, allopathic Dr. Brown in a mass distribution medium, sponsored by Eli Lilly, dismisses the hypericum and doesn’t even mention the evening primrose, herb of choice for PMS (premenstrual syndrome) if not PMDD (premenstrual dysphoric disorder).  “The only pathophysiologic factor that has been demonstrated to be associated with premenstrual symptoms in clinical trials is a serotonin deficiency. .” But Brown adds that healthy diet and regular exercise have benefits with low risk of adverse events (and should be recommended to virtually all women). Pharmacologic therapies carry a greater risk. Options are available: dietary modifications, vitamin and mineral supplementation, exercise, psychotherapy and relaxation [diet with ca 60% complex carbohydrates, 20% protein, and 20% fat. Limit intake of sodium and caffeine. Eat smaller and more frequent meals.] Supplements include vitamin E, vitamin B6, and calcium. Vitamin E, at 400 IU daily ameliorates breast tenderness. Vitamin B6 is required for the synthesis of serotonin. Increased B6 intake may increase serotonin concentrations. Dosages of vitamin B6 should not exceed 300 mg. Calcium relieves physical and emotional symptoms (1200 mg daily) (GI tract cannot absorb more than! 500 mg at one time). “Several herbal remedies, including St. John’s-wort, have also been suggested for the treatment of PMS and PMDD, but published data to support these uses are scarce. [Here she recites the pharmacy Party Line]… Psychotropic agents used include anxiolytics, tricyclic antidepressants and selective serotoninreuptake inhibitors (SSRIs) (in women who experience severe emotional symptoms). Then Brown names the pharmaceutical alternatives, e.g. alprazolam 0.25 to 0.5 mg tid; buspirone 10 mg tid; nortriptyline, 50 to 125 mg daily, and clomipramine, 25 to 75 mg daily and some of their side effects: cardiotoxicity, seizures, anticholinergic effects, weight gain, and possibly more serious effects in overdose. SSRIs are her choice for PMDD. Fluoxetine (SarafemÔ), the most extensively studied for PMDD, and is the only SSRI approved by the FDA for PMDD. A meta-analysis found treatment with SSRIs was favored over placebo for PMDD. That’s the pharmacy party line. Here’s! my party line. I’d recommend to my daughter instead, St. John’s-wort and evening primrose seed (oil approved in Great Britain for PMS). St. John’s-wort, has been compared favorably with many of these pharmaceuticals, and tends to have fewer side effects. Evening primrose oil is a major source of GLA, also useful for the symptoms of PMS and the seeds after extraction of the oil are rich in tryptophan, dietary precursor of the serotonin which Brown mentions is deficient in most PMS and PMDD females. [Brown, C. 2001. Helping Women Cope with Premenstrual Symptoms. Highlights Newsletter 4(2):1-6.]

The FDA  announced that St. John’s-wort was a detoxifier, as herbalists have long maintained. And they were right when they said grapefruit juice could potentiate many medicines. As a matter of fact, grapefruit can potentiate Viagra enough that you could halve your dose, saving $5.00 a pop. But St. John’s-wort reportedly detoxifies the same drugs that grapefruit potentiates. So if you are taking some pharamceutical poisons, you may not wish to use St. John’s-wort, either the weedy species or the woodland species. (Or as Herbal Ed Smith quipped, when he heard about the depotentiation of potent pharmaceutical poisons, he was going to give up the poisonous pharmaceuticals instead of the St. John’s-wort.). It may detoxify that medicine, nullifying or reducing the intended medical effect.  Here are some things I published a decade ago relating to the same subject, but long before it was proven than hypericum was a detoxifier. And before JAMA “proved” (according to their questionable standards) that St. John’s-wort was no better than placebo for serious depression. Respectable herbalists who have published on the subject, almost unanimously have qualified that St. John’s-wort is for mild to moderate, not serious, depression. The JAMA article tended to denigrate the numerous clinical trials that showed that St. John’s-wort was as effective as many of the more often prescribed pharmaceuticals for mild to moderate depression, cheaper and with fewer side effects. Small wonder that St. John’s-wort outsells Prozac and other prescription antidepressants in Germany. I think America will be a happier and healthier country when the natural outsells the synthetic antidepressant in our country too. ~Jim Duke 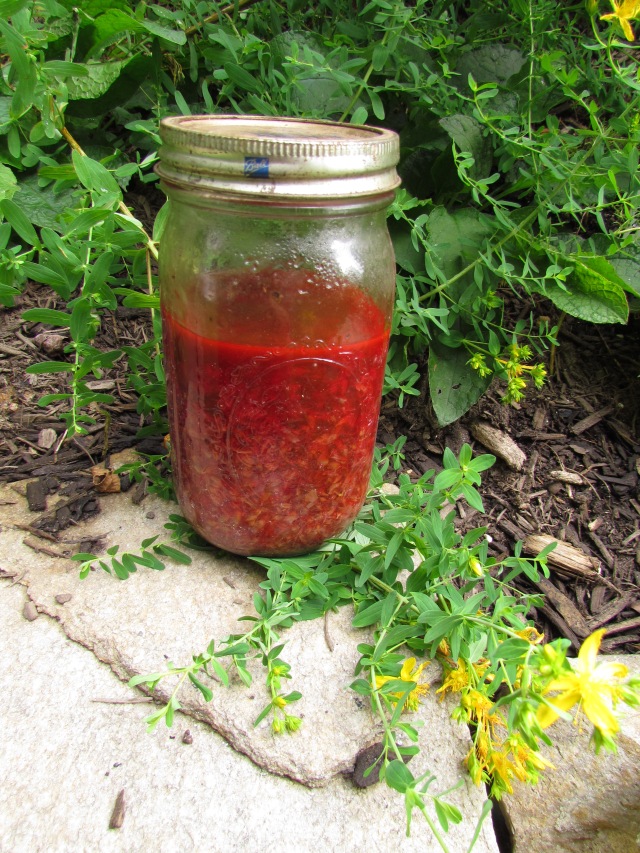 The garden curator’s side note: The red staining pigment found in St. John’s-wort flowers is referred to as hypericin or the “blood of St. John.”  If you observe the flowers growing along the side of the road or in a field, take one and rub it between your fingers and the red pigment, hypericin, will become apparent. One can also use the flowers of St. John’s-wort to make an infused oil for neuralgia, sore muscles, burns, sunburns, strains, sciatica and bruises.  To make the oil, take fresh flowers and buds, place in a quart jar, and cover the flowers with oil. It is often to an advantage to slightly crush the flowers, but not always necessary. Keep the jar covered with a tight lid or with cheese cloth, place it in a warm sunny spot for a couple of weeks – shaking or stirring it daily. You will notice the oil turn deep red. After two weeks or so, strain the flowers out and keep in a cool, dry, dark area. Use topically or make a salve with the oil.

For mild to moderate depression, Jim and I also make a vinaigrette containing the infused oil of St. John’ s-wort, walnut oil for its omega -3’s, seven stigma of saffron due to an Iranian study: Comparison of Crocus sativus L. and imipramine in the treatment of
mild to moderate depression: A pilot double-blind randomized trial
[ISRCTN45683816] Shahin Akhondzadeh*1, Hasan Fallah-Pour1, Khosro Afkham1, Amir-
Hossein Jamshidi2 and Farahnaz Khalighi-Cigaroudi2http://www.ncbi.nlm.nih.gov/pmc/articles/PMC517724/pdf/1472-6882-4-12.pdf

Saffron consists of the stigma of the Crocus sativus

I just returned from the garden and must report that the derecho of Friday night dumped a huge litter of leaves, branches, large limbs etc. all over the Duke’s yard, but fortunately, nothing was hurt in the storm. The power remains out at the Duke’s, and Jim and Peggy are without air conditioner, water, and obviously anything electric. Fortunately, their neighbor has been bringing over morning coffee for Peggy, and Sara has been out picking and raking up and keeping on top of things.

Tonight, while stopping by for a visit to the garden and to check on Jim and Peggy, we were greeted by the opening of the night blooming cactus, Selenicereus grandiflora or Queen of the Night! Emerging out of the side of the thin and rambling cactus has been an ever evolving shape. This shape initially started out as a bump of a wooly and downy feather looking mass and eventually grew into a bud with the appearance of a long tapering profile resembling a swan neck, head and beak. During the week, the neck portion of the bud grew to almost six inches and the outer rays surrounding the tight large bud started to expand. Just as dusk approached, the bud started to become “Queen of the Night.” The beak point of the bud opened to a small one inch diameter revealing the numerous inner stamens and stellar stigma inside. Within the next fifteen minutes, the bud became a crepuscular star with a huge ivory white corolla and yellow and mauve rays expanding out as the evening drew darker. This beautiful sight helped to usher in the almost full and waxing gibbous moon. As a matter of note, the flower was illuminated and faced the direction of the moon as it rose in the eastern sky. We did not detect any pollinators to the flower, but I have read that in their native environment of Central America, West Indies and Mexico, night-blooming cacti depend on bats for pollination. 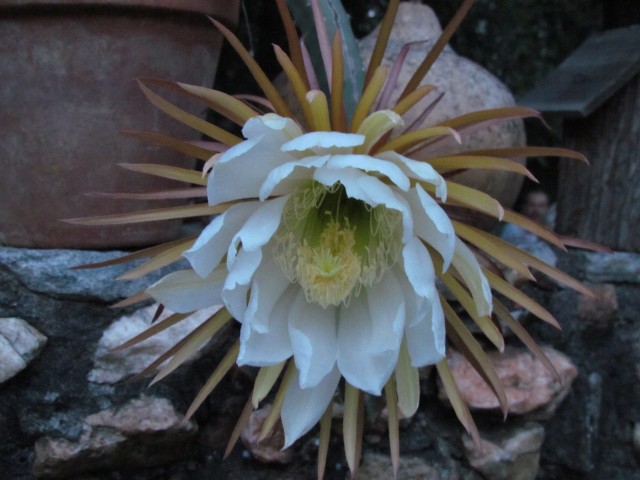 According to Harvey Wickes Felter, M.D. (1922), Selenicerus grandiflora  is used medicinally as a cardiotonic  and to increase renal secretions for individuals with palpitations and angina acting as a sedative and a diuretic. (http://www.henriettesherbal.com/eclectic/felter/selenicereus-gran.html)

When I plan to return to the garden in the morning, I know the flower will be limp and exhausted, hanging its spent corolla downward. She is a Queen of the Night for only one night. There is a second bud in queue and yet to be determined as to when it will elongate, expand and open wide. Perhaps during this full moon cycle, perhaps on July 4th. Hard to say. C’est la vie.

to see what else was blooming during June, come visit us on our facebook photo album.

This entry was posted in Uncategorized and tagged plants, science. Bookmark the permalink.