Our elder, Jim Duke, waxes poetic on the lovely elderberry in the below ditty:

Elders for the Elders  (ca 2009) Parody on Bobby McGee

Elderberry, like black cherry, it’s extraordinary, very good for you, and tastes good too.
My elders kinda think, that an elderberry drink, might even help to stop the avian  flu
Can an elderberry tune, strengthen your immune, if you sing as you sip that brew divine
Good medicine for sure, the elderberry cure, as a jam or juice or wine, it works out fine.

Elderberry’s best, for the herbal  med’cine chest, and might frighten the avian flu to flight.
It has a killer factor for Helicobacter, untweaks your twisted tummy ‘til it’s right
Like an elderberry pill, I really think it will, cool the tummy and tame an ulcer down
And elder flower brew, is a good cosmetic too, and whitens skin that’s turning brown.

I remember from my scouthood, the flowers taste real good, when baked into pancakes, round and brown.
Elder syrup from last year, beats that elder beer, to top off that precious pancake, best around
What a breakfast, what a treat, kinda hard to beat, and you don’t really have to have no meat.
Elder syrup tops the cake, best cake that you can make, almost too beautiful to eat 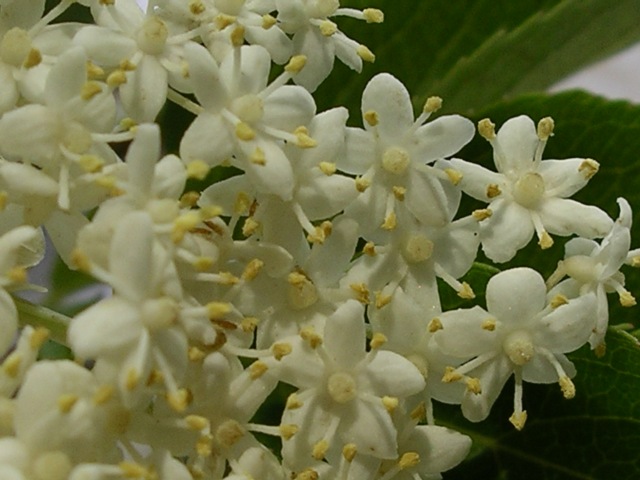 Selections from: Sambucus: Herb of the Year 2013 (American and European Elderberry) Family: Adoxaceae  By James A. Duke

“Are Europeans more interested in their elderberry than we are in our American elderberry? Last time I checked, early in 2012, there were 536 PubMed citations for the European, only 12 for the American. This is clearly a well-studied species. But I still seem to dig up more new activities and indications from the earlier literature I had ignored than from the recent PubMed citations.”

“Optimistically I submit a tentative key to the European nigra and the American nigra canadensis. It will help sometimes but definitely not always. 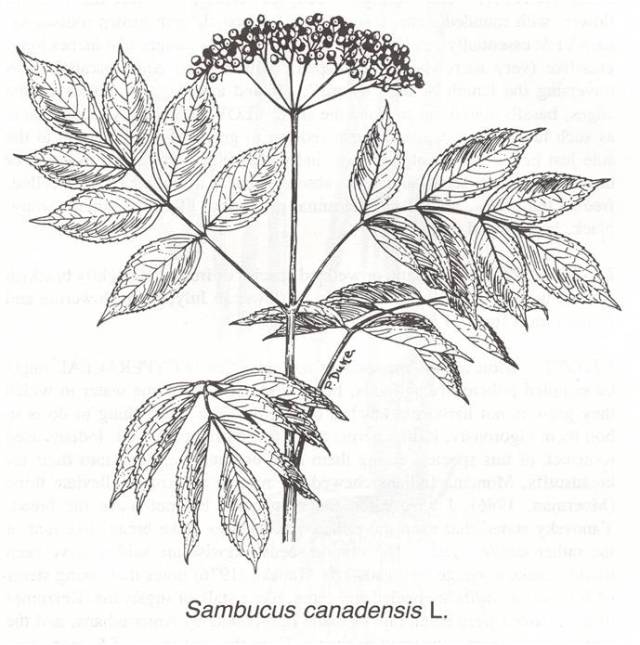 “Steven Foster and I are updating the Foster/Duke Peterson Eastern Medicinal Plants Field Guide which should see light late this year or early next year. Foster and I agree that the European and American taxa differ in leaflet number (almost always five in S. nigra, almost always seven in S. canadensis), fruit color, and pubescence. “There seems little justification for uniting them.” (S. Foster, personal communication, 2012). I agree! Both good medicinal species!!” 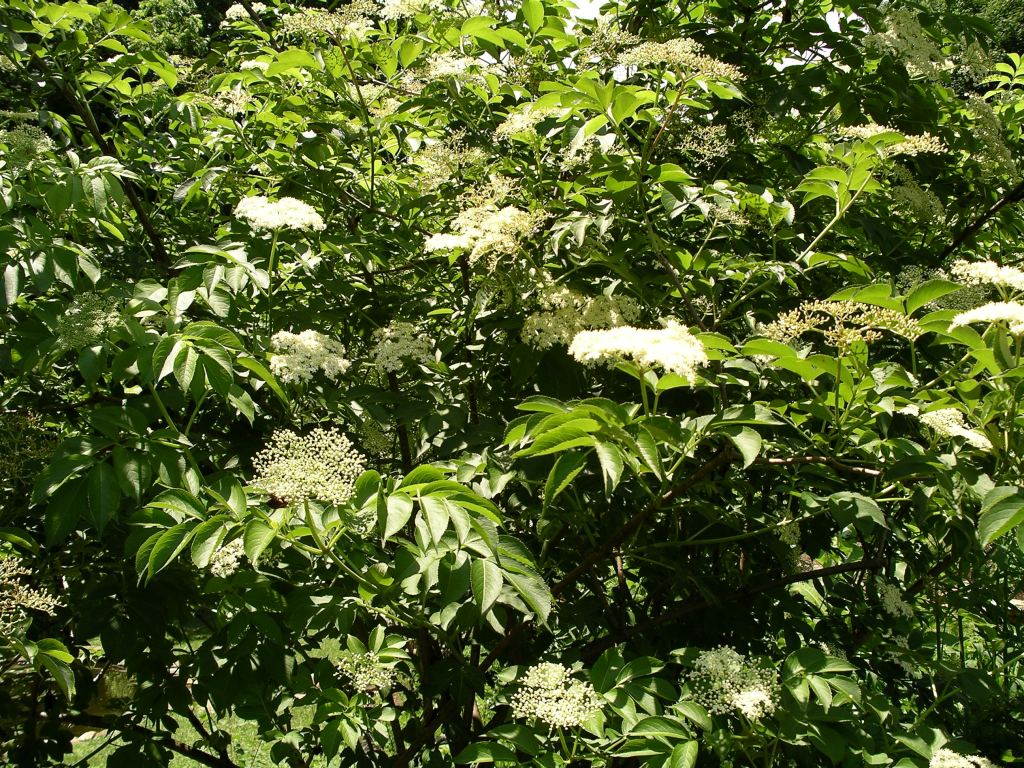 For a demonstration on how to make homemade elderberry syrup and other herbal remedies, come to our “Growing Your Immunity” workshop in the garden on Saturday October 6 from 1-4 pm. Email helometz@hotmail.com if you interested.

Sitting here on this end of Labor Day evening with the late summer sounds of katydids, snowy tree crickets, and a distant great horned owl wafting in my window. I had hoped to write this blog earlier in the week, but instead have been harboring a late summer illness. Fluctuating flu like symptoms, laryngitis, intense pressure headaches, nausea, cough, and aches have been with me almost a week.  Since I spend so much time outdoors and have been bitten repeatedly by mosquitoes, these symptoms could be caused by the West Nile virus, an influenza virus, the common cold virus, or worse yet, the spirochetes of Lyme’s Disease. Regardless the source of my illness, I have been reaching for Elder flower tea, elderberry syrup, and elderberry sub lingual lozenges to help combat these ails. Recent research suggests that elderberries help curtail the influenza virus from adhering to cells. Herbals also recommend Elder flowers for fevers and colds. I figure that I made it to this place in human history not only by procreation, good decision making and smarts, adequate food and shelter, the virtue of my ancestors’ ability to withstand and evolve with microbes, but also from plant medicines of the earth. My plant medicine arsenal of elderberries and Elder flowers is based on modern science and thousands of years of human experience.

Hippocrates is considered the “father of modern medicine” as he taught that diseases naturally occur in response to food, lifestyle, and environment. It is written that he called Elder “the medicine chest of the people.” Hippocrates worked as a physician, and his beliefs’ on medicine were in opposition to the prevailing thought of his time during the 4th and 5th century BC that promoted a mindset of disease as a punishment from the gods and evil spirits.

Hippocrates’ philosophy on medicine did not travel to all corners of human society.   Centuries of folklore and superstition of healing from spirits remained until recent times in many cultures regarding Elder. Elder was so revered that it was planted near homes for protection from bad luck, illness, and against getting struck by lightning. Elder was never cut by European farmers for fear that a tree dryad or goddess residing in the soul of the tree would impose evil spirits and bad luck upon them. Only with permission from the dryad, one could cut part of the Elder for protection or for medicine.  The spirit Hylde Mkoer, the “Elder tree mother,” was thought to haunt anyone who cut down an Elder.  Amulets containing Elder branches were believed to aid in rheumatism. Some cultures felt that lying down by an Elder would help cure epilepsy. Others rubbed warts with Elder leaves, buried the leaf, and believed that when the leaf would rot, it would remove the wart. If one’s dream contained Elder, it was considered an omen that illness was imminent. Elder was gathered at the end of April to ward off witches, but others thought Elder would attract witches and avoided going near the plant after dark. Some folks placed pieces of Elder into wedding ceremonies for good luck. As Christianity spread through Europe, the worship of trees, such as Elder, was prohibited. However, to aid in the conversion of pagans to the new religion, many of the pagan beliefs were integrated and blended into Christianity. Elder was said to be the tree of sorrow that Judas hung himself on after betraying Jesus. It is even thought that the wood of Jesus’ cross was made of Elder.

Elder – Magic, folklore, religion, science or a bit of it all?

From the time of the Roman Empire to the present, Elder found its way into nature’s medicine chest by virtue of the following attributes: Elder leaves were combined with other herbs and made into ointments for piles; leaves and bark were purgatives and emetics; teas were made of the flowers as a diaphoretic and sudorific to promote sweating for fevers and colds; the flowers were also used as a diuretic and considered important to rid the body of waste in the case of arthritis; flowers were used for allergies, ear infections and improve  immunity; elderberries not only make a fine wine but also are high in flavonols, anthocyanins, vitamin A and C. These days one can also find fine brews made with elderberries. 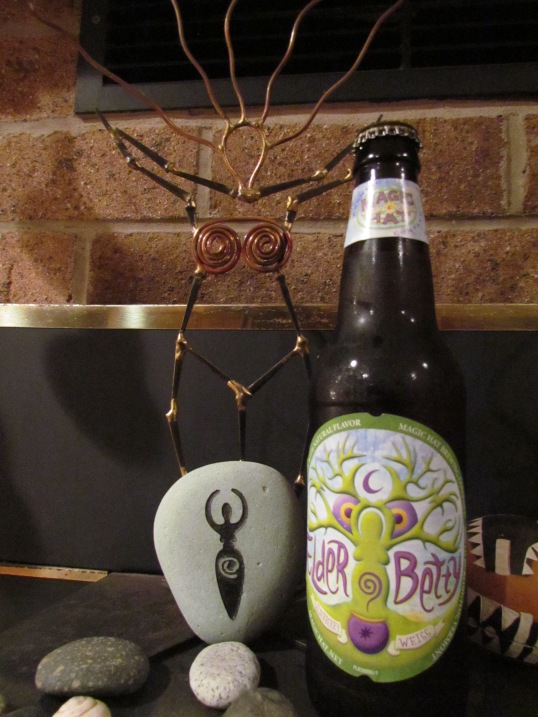 Elder was listed in the U.S. Pharmacopoeia from 1831 to 1905. Recent research on elderberry extracts have been conducted on the ability to inhibit flu viruses and cancer. Such papers include: Randomized Study of the Efficacy and Safety of Oral Elderberry Extract in the Treatment of Influenza A and B Virus Infections (pubmed 15080016);  Elderberry flavonoids bind to and prevent H1N1 infection in vitro (pubmed 19682714);  Inhibitory activity of a standardized elderberry liquid extract against clinically-relevant human respiratory bacterial pathogens and influenza A and B viruses (pubmed  PMC3056848). 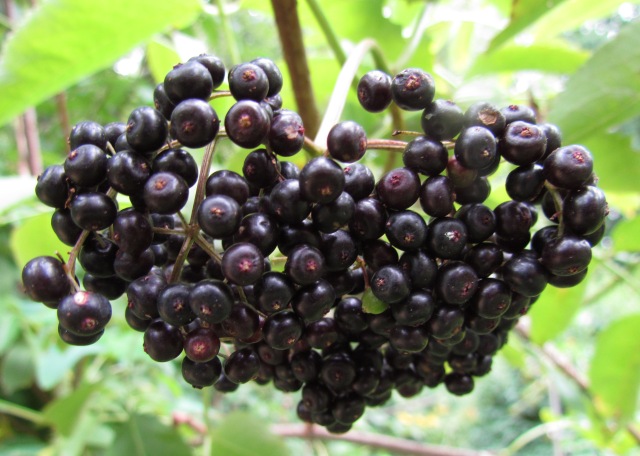 Scientists have been focusing their research mainly on the elderberries – but not on the other parts of the plant. One should avoid eating unripe berries, as well as using branches, leaves and roots of Elder for medicine since they contain cyanogenic glucosides. Consumption of these parts of the plant may cause nausea, diarrhea and disorientation. !!!!!*!!

Elder (Sambucus spp.) got its common name from the Anglo Saxon word Aeld, which means fire. Clip a branch and you will notice that it is hollow inside. These hollow stems have been made into pipes and to blow air into smoldering flame as well as whistles and flutes.  The Latin Sambucus is reported to possibly be derived from Sambuke, a musical instrument thought to be made from Elder wood. 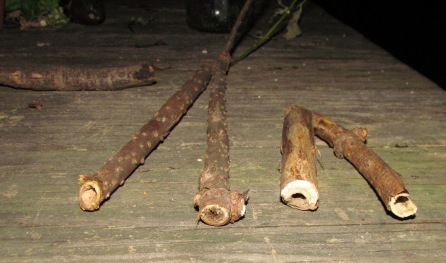 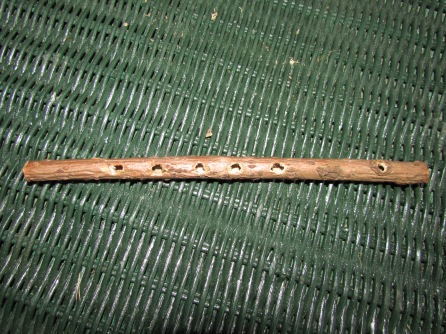 one of the Elder sticks hollowed out for a primitive flute

By mid-summer, Elders demand respect as they hang their heavy heads of deep purple berries in the warm steamy air. These berries are a distant reminder of the white, lacy flower inflorescences of late May and early June. Elderberries can be made into wines, immune syrups, and lozenges for the cold season ahead. Consider finding an Elder growing  near the water’s edge or in low lying areas and pick of its berries as others before you have done for centuries. Perhaps even meet one of the dryads hanging out within. (just checking to make sure you readers haven’t fallen asleep yet). Make a syrup to store in the refrigerator, and at the onset of a cold or flu, take one tablespoon 2 – 3 times a day or even one tablespoon an hour.

Show respect to our Elders, and may their spirits be good. 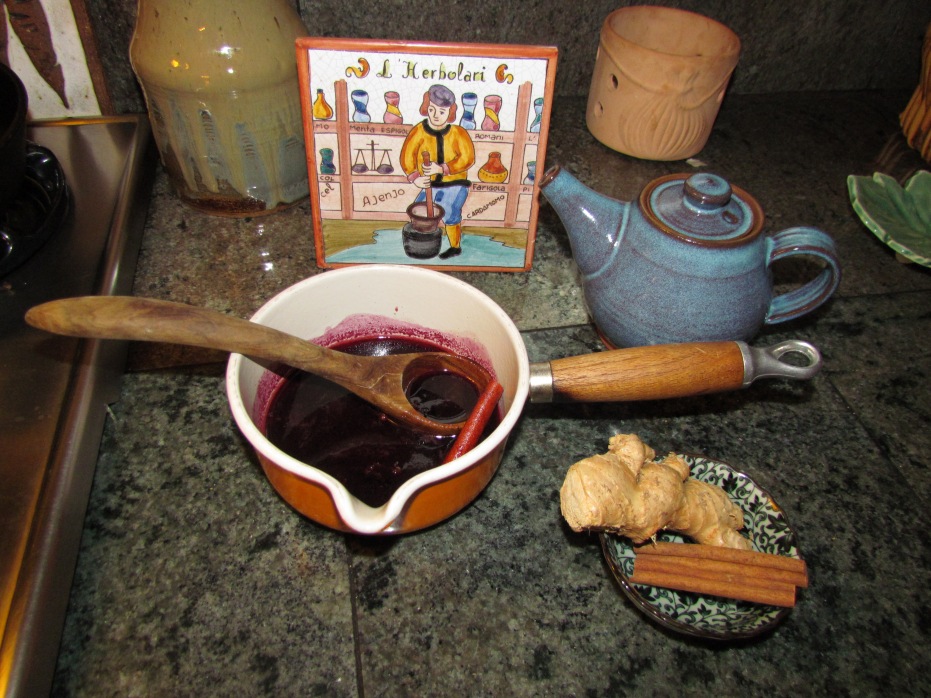 Elderberry syrup made with cloves, cinnamon sticks and ginger

For a demonstration on how to make homemade elderberry syrup and other herbal remedies, come to our “Growing Your Immunity” workshop in the garden on Saturday, October 6 from 1-4 pm. Email helometz@hotmail.com if you interested.

1 Response to Plant Rant: An Elder Spokesman on Elders