29 December 2011
This morning’s email report from Jim regarding the garden and the greenhouse:
“At 7:00 I was surprised that there are white conical and ribbonlike frost flowers, not a full inch tall but impressive. No frost on my win shield and possibly not at the top of the hill. I was racing to the frost flower Two burners and 45 degrees at 7:00” 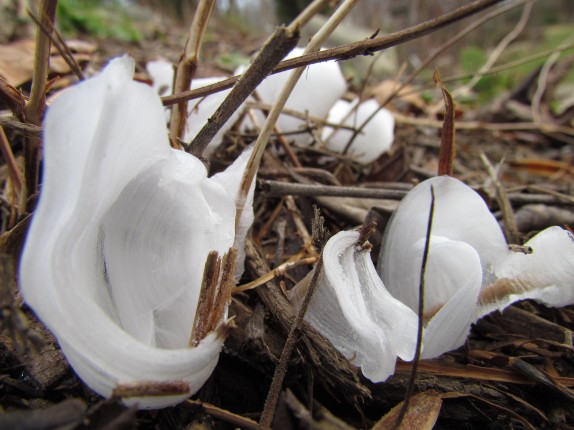 Over five years ago, Jim and I transplanted  five frost flowers, Cunila origanoides, (L.) Britt. Family -Lamiaceae, from the nearby reservoir to the Toothache and Headache plot of the garden. Frost flower is found growing on dry rocky slopes and bluffs around the reservoir and uphill from several riparian areas in our region. Our five plants have dwindled to two remaining, and only one of them is lush throughout the growing season. Come winter, there remains just a skeleton of this mint with dried oregano scented leaves clinging to fragile and lanky stems. On frosty mornings, such as the one today that occur after a clear night sky and below freezing temperatures, the frost flower pushes up exquisite frozen forms out of the earth. These forms are ephemeral nature’s artistry. By noon, if the temperatures climb, they vanish. I was lucky to get to the garden today to capture their forms. I am attaching some of the photos and Jim’s earlier emails with his notes and information about the frost flower. I encourage you to locate a frost flower in your locale so that you, too, can witness this lovely curiosity on a frosty late autumn or winter morning: 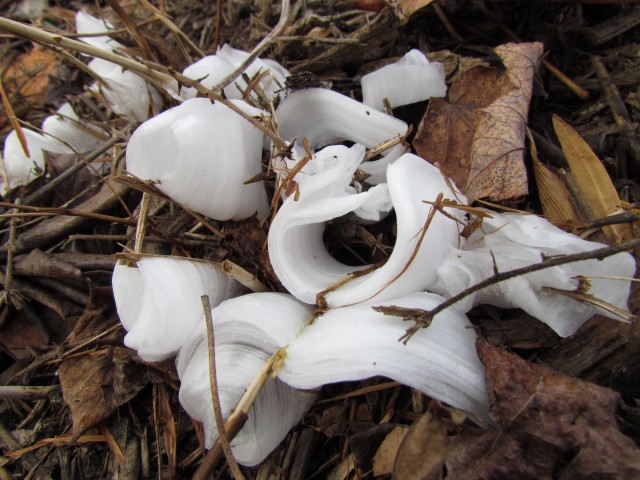 NOTES (FROST MINT): I predict on Dec. 12, 2011 that we will have many ornate frost flowers lasting until noon at least on Dec. 13, 2011. Frost flowers apparently represent a freezing of  waters extruded or exuded from the roots; they can be spiral shaped, ribbon-shaped, volcano-shaped, shall we say pleiomorphic, and often irridescent. They can be quite pretty My guess is that they are most extensive after a hard freeze night, following a day when it got well above freezing. My guess!!. It would make a nice study for some volunteer whole is more cold tolerant, maybe even some slow motion photography. I predict that tomorrow And that they will last until noon before melting in the oblique sunlite. 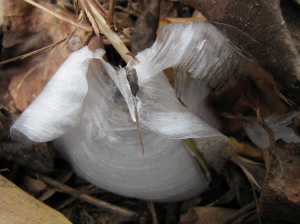 ***Helen’s note: A search on the internet led me to an informative piece, Ice Formations Growing From Plant Stems by Dr. James R. Carter, Professor Emeritus Geography-Geology Department Illinois State University, Normal IL 61790-4400, which describes the process by which the frozen forms are created:
I am copying from: http://my.ilstu.edu/~jrcarter/ice/diurnal/stems/

The openings in these stems are too small for an ice crystal to pass through but are large enough for water to pass through.  As long as the water inside the stem remains liquid the ribbons of ice can continue to grow.  But, if for some reason the super cooled water in the stem turns to ice the plant stem will be ruptured.  A number of authors mention ruptured stems.” 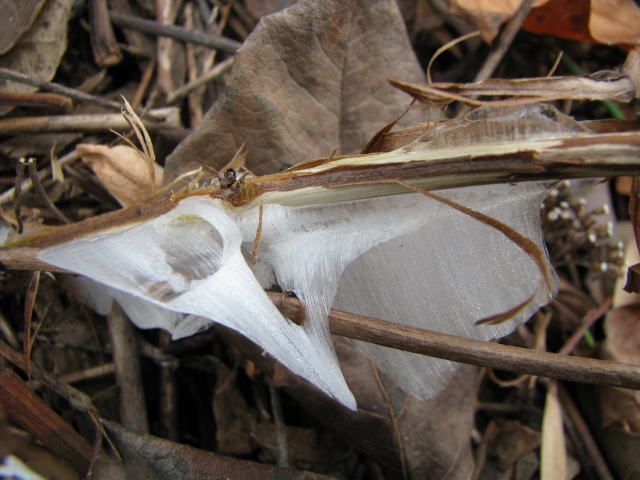 Here is what I wrote  last year “ Here it is fall of 2010. Both of my TAI classes agree. My frost mint smells better culinarily than my oregano in the garden or in my spice rack. But most Americans do not even know my culinary cunila. I went to PubMed this AM and found only 8 abstracts on Cunila , none on my species, all apparently on alien species, most of the studies on Brazilian species. We Americans tend to ignore what is growing in our back yard.  Let us speculate, if before Columbus, Cunila origanoides had been srestricted to the Mediterranean and the Origanums were restricted to North  America,  I suspect my McCormick  spice rack would have the frost mint  there instead of oregano. And there would be  more than a hundred abstracts on Cunila origanioides and only 8 on Origanum vulgare. And there would be a hundred indications for Cunila and only a dozen indications for Origanum.  But although we have not had our first frost, it is nippy out, so I am harvesting some of those leaves now, and sipping it in my sagaciTea as I update my sage and frost mint writeups for my spice database.   Strange breakfast today. Sort of a  poor man pizaa, open faced melted cheese spinkled with garlic flakes and flaked frostflower leaves on one side, oregano on the other, both good.. I prefer the cunila. My after-breakfast beverage; hot sagaciTea, with the autumn leaves of the frost mint. 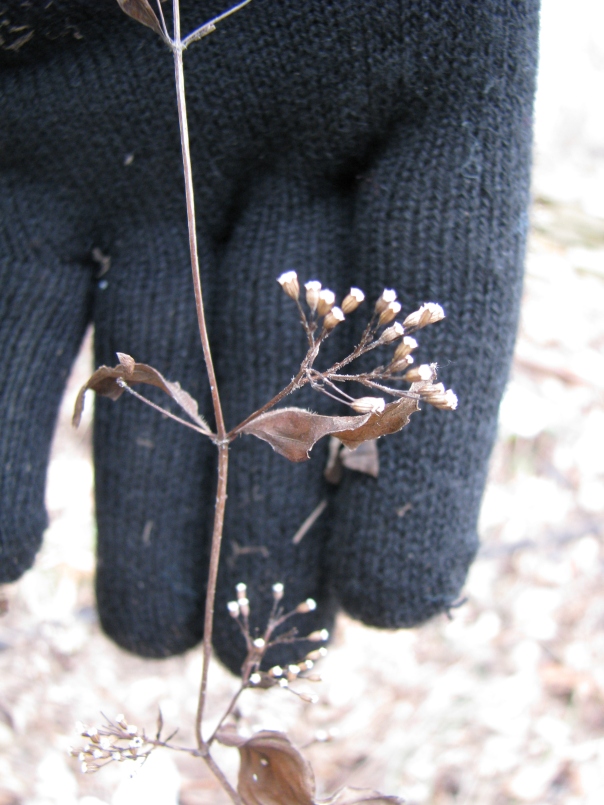 Some folklore I believe; some I don’t. BUR recounts that this  plant is reported to kill rattlesnakes when held to their noses. (BUR) Organic Gardening quoted famed pharmacognocist Norman Farnsworth (January 1990, p. 54), “Thymol has been found to loosen phlegm in the respiratory tract… It also has been shown to act as an antitussive which will relieve coughing.” I think it will be just as promising for backache. If I had a backache and a lot of frost mint, I’d drink frost mint tea and  add some to my bath water. The oil is said to be a stimulant aromatic. Because of its thymol, it is probably a good antiseptic . But don’t overdo the thymol, it can irritate mucous membranes. Even GRAS herbs should be used in moderation. It seems that thymol and carvacrol often run in tandem. I suspect that within a species, if one is high, the other is compensatorily low. (HOS)    This herb is a good American answer to oregano. Today as I write this, Dec. 28, 2007, there were two tentlike veils of ice surrounding the lower inch or so of the stems to which the thyme-scented leaves are still attached. And the leaves still smell strongly of oregano and some were crushed up with a boring squash dish that needed a culinary cunila uplift. 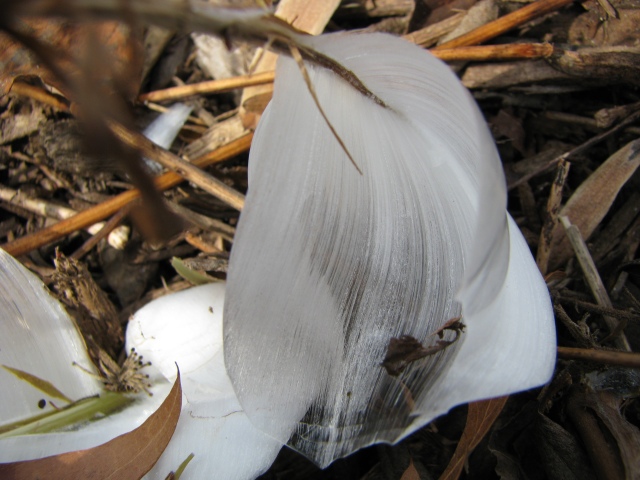 ANTONIO AND THE FROST FLOWERS

Botanist, herbalist, and apparently shamans often resort to their sense of smell. I had Antonio sniff this thing growing in the deep forest and he said it has the spirits of oregano. How right he was. The aromatic chemicals in frost flower share the essences of European oreganos (Not marjoram), savory and thyme, like our American dittany and hosebalm (Monarda), all good spasmolytic herbs, loaded with carvacrol and thymol. They could be substituted, one for the other, as pizza herbs, at least in my kitchen. I didn’t even try to explain to Antonio, who has never seen frost, the significance of its names frost flower or wild dittany.

But in early autumn (also a great jazz tune) this old botanist’s fancy turns to frost flowers. The first weekend in October I head for what I call frostflower fen, where there are an abundance of the plants, and I dig a new stash for myself. Not for my pizza pies, but so I’ll have flowers every month of the year. For almost a decade now, I have had flowers twelve months of the year, Thanksgiving, Christmas Day, New Years Day, etc., at least when the temperatures got well below freezing the night before.

DOSAGES (FROST MINT): FNFF = !. Dittany could be substituted for any of the other high carvacrol/thymol plants (Monarda, Origanum, Satureja, Thymus), one for the other, as pizza herbs, at least in my kitchen. If I had pizza with cheese and tomato, and no spices, I’d add a little dittany in lieu of oregano. Grieve’s Herbal speaks of “oil of dittany, which is stated to contain about 40 per cent. of phenols, probably thymol.”  (GMH; HOS).  Probably on par with thyme, culinarily and medicinally. i,e.1 tsp. herb/cup water/1-3x/day 1-4 g dry herb, or in tea, 3 x day; 1-2 g/cup several times a day

DOWNSIDES (FROST MINT):Not covered (AHP, KOM, PH2). I feel it as safe as thyme and oregano, based on the limited list of phytochemicals available to me.

This entry was posted in environmental education, medicinal and edible plants, Uncategorized. Bookmark the permalink.