Peggy’s favorite saucer magnolia sits between the Duke’s house and the driveway that takes visitors down to the Green Farmacy Garden. Peggy likes to sit in her sunroom during the early spring and admire the tree’s dramatic profusion of pale pink and magenta blooms. Growing under the magnolia is one of Jim’s favorite wild food plants, the groundnut (Apios americana). Peggy despises the groundnut since it climbs and rambles through her beloved magnolia. Jim is very kind to Peggy and tries to weed out the groundnut even though he immensely admires this native edible vine. Every fall, as we take classes to help Jim dig for and weed out the groundnuts, we typically unearth a necklace of small oval shaped tubers. You see, the groundnut is not a nut – but a tuber and belongs to the legume family (Fabaceae). The tubers are about an inch long and joined by a thin string like root.

This particular year, when a class came to dug up the groundnut necklace, we took notice that the vines with their pinnate and compound leaves had grown at least five feet high into the tree and were laden with inflorescences of mauve pea keeled flowers.  Several of the students made wreaths of the vines for Peggy and Jim.  We called Peggy to come out of her sunroom to see, and after all these years, Jim and Peggy finally found common ground with the groundnut:

The next day while I was busy, but not at the garden, two volunteers, Eric and Sara, came by to help out. Due to my absence, Jim was in charge and asked these two wild edible enthusiasts  to continue digging the groundnuts that so burdened Peggy. Upon digging, Eric and Sara not only unearthed necklaces of groundnuts, but they also hit pay dirt with a jackpot groundnut that weighed in at 14 and 5/8 oz!!!!: 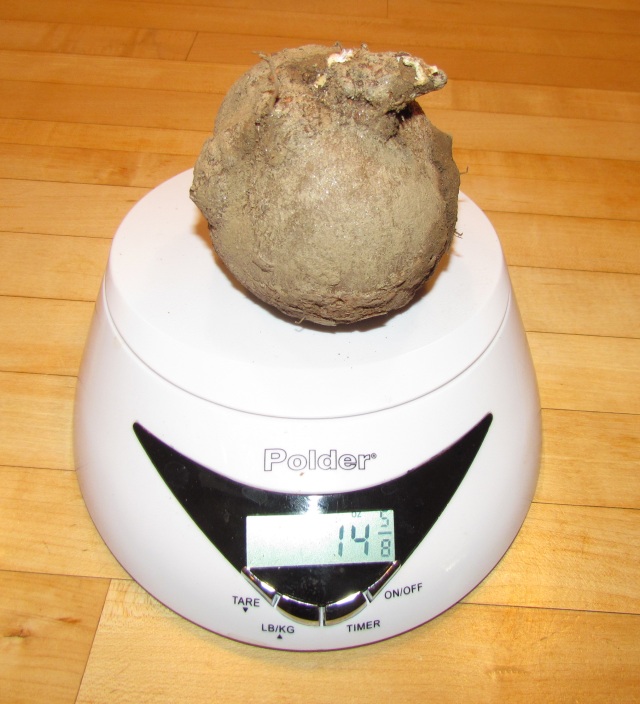 Upon seeing the enormous groundnut, it became apparent why the early colonists and pilgrims in places like Jamestown, VA, Plymouth, MA and Roanoke Island, NC used the tubers to help stave off famine during the long cold and hard winters. According to Jim Duke’s and Steven Foster’s Peterson Field Guide to Eastern/Central Medicinal Plants and Herbs, groundnut has three times the protein of potatoes and contains phytoestrogens such as genistein. Groundnut is found from Nova Scotia to Florida and as far west as Colorado. Jim transplanted the groundnut to his property from its typical habitat – a nearby bottomland riparian region of the Rocky Gorge Reservoir. It is noted that groundnut was found near old Indian campsites.  Jim writes in his  Handbook of Energy Crops (1983),  “during the potato famine of 1845, Apios was introduced to Europe. Its cultivation there as a food crop was abandoned when potato growing again became feasible.” Jim also suggests that the sticky latex juice of the tuber “might be used for production of rubber.”

In the book, Edible Wild Plants – A North American Field Guide (Elias and Dykeman),  it is recommended to, “boil tubers in heavily salted water until tender. Season. Slice and fry leftovers, or grease and roast to regain tenderness, flavor. Also thinly slice raw tubers and fry like potatoes in butter or pork; season. Or bake at 175 C (350 F) 45-60 min until tender. Flavor turnip-like.”

Duke soup with groundnut in spoon. Latex is oozing out of the right end of the groundnut tuber.

During our happy hour vesper music night the next week, we roasted up the groundnut,  and served it to our volunteers, who offered their comments in an youtube video below while Jim sang this ditty:

WHITEMAN SAY TO THE REDMAN, “IS THIS THE PROMISED LAND?”

“GROUNDNUTS AND WILDRICE AND TURKEY IN THE HAND!”

WHITEMAN SAY TO THE REDMAN, “JUST LOOK WHAT YOU HAVE GOT.”

“WILD RICE AND WILD THYME AND TURKEY IN THE POT.”

WHITEMAN SAY TO THE REDMAN, “I THINK I ENVY YOU.”

“WILD RICE AND ARTICHOKES AND GROUNDNUTS IN THE STEW.”

REDMAN SAY TO THE WHITEMAN, “DO YOU REALLY HAVE TO PUSH?”

“REDMAN AND GREENER LAND, AND TURKEY TO THE BUSH.”

REDMAN SAY TO THE WHITEMAN, “ARE YOU REALLY HAVING FUN?”

NUTS AND BOLTS AND WILD, WILD OATS, AND THE TURKEY ON THE RUN!”

BLACKMAN SAY TO THE WHITEMAN, “JUST LOOK WHAT YOU HAVE DONE.”

“PLAYED YOUR HAND ON THE REDMAN’S LAND, AND THE TURKEY’S ON THE RUN.”