April 11, 2011
The Washington Post article, Plants’ Earlier Bloom Times Hurting Some Creatures, (April 9, 2011 – front page- A section) reports how climate change may be causing wildflowers to bloom early and adversely affecting the interrelationships of species.  Interviews with ‘bloom watchers’ indicate that many species of wildflowers are blooming days, if not weeks, ahead of when they did forty years ago. There is a fear that with earlier bloom times, certain migrating birds, which are dependent upon insects that feed on or pollinate plants, may be unable to obtain adequate nutrition to sustain their populations. Basically, the insects will not be in sync with the migrating birds when plants bloom early. The study of phenology, plant and animal yearly life cycles, has been of interest here in the garden.  Jim Duke and I have made several attempts to document bloom times of our plant species. Jim, the scientist, was successful and wrote PEEP SHOW.*(below) Typical of my not-so-scientific personality, it seems every year I get off to a rather meticulous start, grow sporadic in my note taking by June, and almost peter out completely by August.  Regardless of when flowers bloom, there still is a curiosity as to how plants know when to rise and shine and to prompt the apical meristems (growing tips) to stimulate and differentiate into roots and shoots.  Fascination is found in the innate calendars of natural systems, whether they revolve like clockwork or are early bloomers.

sound of the spring peeper –

PEEP SHOW by James A. Duke
Peepers come and peepers go With their mostly audial show. How do we humans come to know? When spring peepers start the show? Methinks the peepers get their cues From the signals that the flowers use And if my theorem is for keeps Flowers can predict the peeps. Because the flowers also use The same environmental cues The cold, the sun, the rain and snows All of these the critter knows Seems he’s learned to integrate 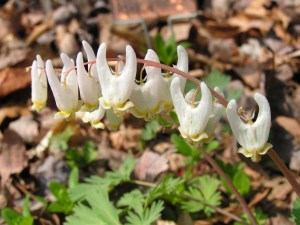 Fiddleheads first unfurl their fiddle (Matteucia) When the peeper show’s at the middle Like green mushrooms, mayapples sprout (Podophyllum) When the peepers start their shout Each one tries outshout the other Hoping to win a winsome mother And if these courtships consummate The song and dance will soon abate But hindsight’s better’n science fiction Tougher it is to make a prediction I predict that when my last crocus croaks (Crocus) Its almost time for the boistrous blokes. I may miss by a day, maybe a week And then the peepers peeping peeks With the fading Christmas rose (Helleborus) The peeper chorus grows and grows Just after my first opening daffodil (Narcissus) He’ll proudly peep his piercing trill Hoping that he will have mated Before the spring has sublimated. One week past the last snowdrop (Galanthus) One proud peeper will pop his top Seeking to assert his powers With the first of my snowflowers (Leucojum) I’m afraid the peeping will have hushed When flowers close on my spicebush (Lindera) With the leafing out of sassafras (Sassafras) When the dogwood blooms at last (Cornus) Before the bolt of the stinging nettles (Urtica) Just after the bloodroot drops its petals (Sanguinaria) Eggs abound at the edge of the pool Soon tadpoles will head off to school Metamorphosis, polywogs, Tadpoles have turned to frogs; They sang their thing, preaching spring The song is gone! But life goes on. February, March or will it be April Who among us will be most able To predict the timing for next year When peepers start to chanting cheer Those who know the march of spring Can predict this peeper thing The song commences, if I don’t err 9 weeks after the butterburr (Petasites) This year that was on groundhog day (2001) Sun ran my groundhog clean away 6 weeks after the skunk cabbage flowers (Symplocarpus) Spreading its smell on palustrine bowers 5 weeks after my snowdrops appear (Galanthus) That’s when peepers start peepin’ next year I could be off a day or two That don’t matter to me or you With the peepers let us sing We celebrate another spring     – “junkmail” sent by James A. ‘Jim’ Duke to Helen Lowe Metzman on Thursday, April 07, 2005 5:49 PM

Bloodroot info – if you still feel like reading Spring is heralded by the lovely white blooms of bloodroot (Sanguinaria canadensis L.), which are peaking now in the nearby woodlands and found in the garden in the Cancer plot and down in the yin/yang valley. This native wildflower is aptly named due to its exquisite blood red root that was used by Native Americans to paint their faces and as a dye. It is reported that they also used bloodroot for lung ailments, as an emetic and for warts.  BEWARE!!!! Bloodroot can be toxic and is considered caustic and an eschariotic (corrosive and scarring). Bloodroot has several powerful alkaloids, but the one it is most known for, sanguinarine, was used in Viadent mouthwash.  Sanguinarine is also researched extensively for its anticarcinogenic properties due to its cell cycle arrest and apoptosis (cell death) processes.  My pubmed search shows a recent study PMID: 21318089 of sanguinarine inhibiting prostate tumor growth but also a paper PMID: 20932193 of individuals using the “black salve” made from bloodroot with very detrimental effects. Keep in mind that just because bloodroot is “natural” doesn’t mean that it is safe and one must be very careful to research any type of drug whether it is natural or synthetically produced.

After flowering,the bloodroot ovary elongates and produces a thin seed pod. The seeds of bloodroot are dispersed by ants in a process called myrmecochory. The seeds have an elaiosome, a lipid rich appendage that attract ants to the seeds.  The ants carry the seeds to their nests, eat the elaisome and then the seeds may germinate in or around their nests. By next week, I suspect the petals will have dropped and the ovaries will be ripening. Come by garden and check out what remains of this native plant that is carried by ants and carries its own American history and much medical potential.