3/14/2011
The earthquake, tsunami and potential for nuclear meltdown have been a horrifying true triple threat to the Japanese people.  Thousands of survivors are stranded or living in shelters with a just a mere paucity of food and water.  Emergency services and rescue are arduous and unpredictable. To grasp what these people are dealing with is impossible as the magnitude of the earthquake and the tsunami aftermath are beyond comprehension.  My heart, prayers and condolences go out to Japan and her people in hope that food, water, and shelter –all free of radiation poisoning – will be available within the foreseeable future.

While working in the garden today cleaning up beds and seeding fenugreek and poppy, my thoughts turned toward the survival of the Japanese people and eventually meandered over to my own survival.  Survival in the face of a disaster that could potentially leave me stranded with no food and a scarcity of water.  I wandered the woodlands and took stock of what was growing on this late winter day. Not much. Spring really hasn’t popped out yet and there were only a few plant species with any substantial nutritional value and several with medicinal value. If my town were to be hit by a devastating disaster and all the stores shelves were suddenly devoid of the basics and beyond – what plants in the woods could I survive on on this mid-March day? Here is a list that caught my eye:

Most abundant were the basal leaves of garlic mustard, Allaria petiolata, – an overwintering potherb brought to North America from the colonists to add to soups etc. Garlic mustard is now invasive and despised by the native plant advocates but contains a nutritional value high in vitamin A and C. 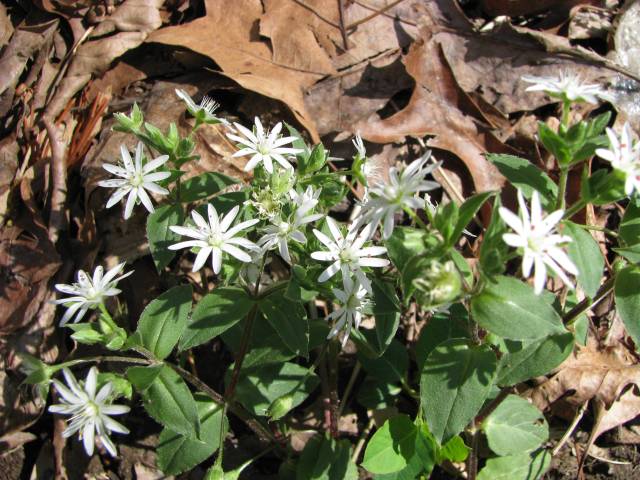 Gill over the ground, Glechoma hederacea,- makes a nice tea with vitamin C, good for coughs.

Buds and twigs of spicebush, Lindera benzoin, – allspice substitute, carminative for dyspepsia and flatulence.  Tea for colds and fevers.

Ground nuts, Apios americana, – rich in protein…I know from summer and fall where to collect, but above ground parts are not up yet.

White and Virginia Pine, Pinus spp., – tea made from the needles for vitamin C.

Nettles, Urtica dioica, – just coming up but very nutritional with Vitamin A, C, and loaded with minerals.

Walnut, Juglans nigra, – if there is still any meat left in the hull, they have a nutritional value of protein and omega 3’s.

Acorns, Quercus spp., – the acorns would need to have the tannins rinsed, soaked or boiled out prior to consuming. Nutritional value- protein, carbohydrates, vitamin A, C and amino acids.

Chicory and Dandelion, Cichorium intybus and Taraxacum officinale, – roasted roots make a nice coffee substitute (no caffeine for this caffeine junky though)…their leaves can be collected for highly nutritious greens but they aren’t of substantial size yet around my parts of the woods. 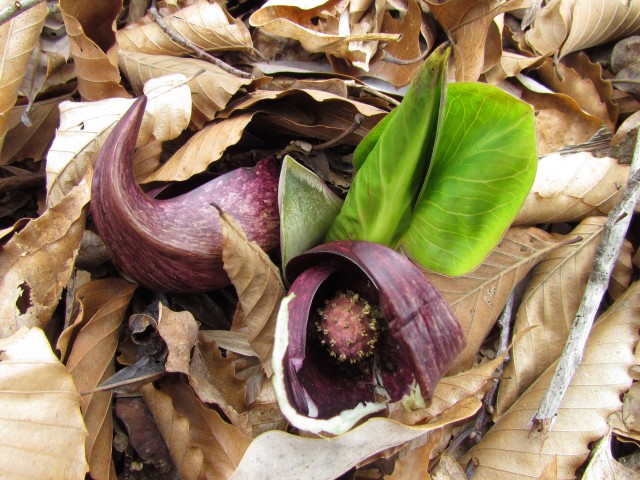 !!! Beware of Skunk cabbage, Symplocarpus foetitus, looks tasty with its large lovely green leaves, but they are filled with calcium oxalate crystals which render this plant toxic and inedible for consumption!!!

I am not sure how the plants fared during the catastrophe in Japan, but hope that some of the people will have the ability and knowledge to make use of uncontaminated wild flora for nutrition until supplies of food are delivered by sea or air. In Peace.

1 Response to This Week’s Plant Rant – Stalking to Survive